September 25, 2011
The other day I was talking to a friend of mine. Our office canteen has this great Biriyani counter. I told my friend that this guy has one of his outlets somewhere near RV Dental College in JP Nagar. My friend said, you mean the one opposite to HDFC bank. I said, no HDFC Bank should be opposite to this RV Dental College. (Actually, neither is correct, but that isn't the point of this post). We laughed over this, but this reminded me of the way landmarks keep changing and its repercussions. I sometimes take a bus to travel back home from my office. BMTC conductors are familiar with the way the bus stops were named earlier. But that was then, and there are several new landmarks in Bangalore now, including on the Bannerghatta road. There is this Bannerghatta road and Outer ring road junction and BMTC knows it as JD Mara junction. On the same junction, there's a Maruti showroom called Mandovi Motors. Similarly there is Jayadeva Flyover junction which was called BTM checkp
Post a Comment
Read more 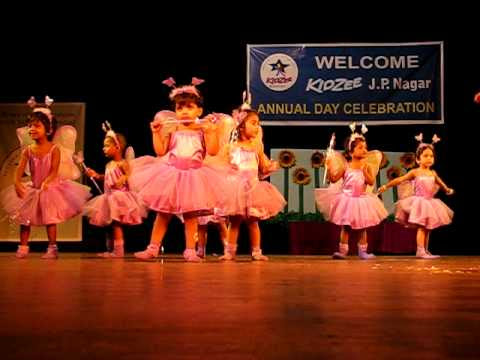 We recently underwent the domestic change management exercise of sending our young daughter to a play school. Although we have been thru this once (our son), but still the anxiety was no less. It is very difficult to break a young kid's heart. Hand her over to a teacher unknown to her while she is still crying... And this actually happened when she exchanged laps between me and her teacher although against her will. In the first two weeks, it was all cries, sobs and such for - स्कूल नहीं जाना! ( I don't want to go to school)...  Two weeks later, again cries, sobs and such for -  स्कूल जाना है! (I want to go to school!) That was a quick transition, we thought. It was heartening to see her performing in the school annual day function as well, doing a butterfly dance -  When I left my home for the first time to join my job, I wrote a letter to my parents. The content more or less said that I am that kid-bird which has grown up and has left its nest. It was written in an atte
3 comments
Read more 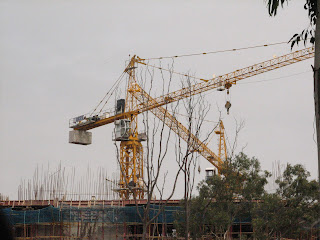 Young kids always come with some interesting observations from the way they understand the world. In their playfulness they bring out their interesting interpretation of things. My kids are no different and I used to quote my son a lot when I was regular in this blog earlier. Now my daughter does that quite often. Like she gets really excited when our car undergoes some underpass. She starts shouting with joy the moment she realizes we are going to go thru a tunnel like underpass. My son always wants us to go atop a flyover. I try to avoid them as it could be a detour, as well as many of the Bangalore flyover land you right into a Jam point! Anyways... Recently, when we were standing on a red signal, my daughter started singing the rhyme "London bridge is falling down", all of a sudden and with great enthu and all. And when we paid attention we noticed that she was also trying to point to something. It was this site - Needless to say, we couldn't st
Post a Comment
Read more

July 04, 2010
I recently bought this Nokia 5800 XpressMusic mobile phone. Recently as in, a few months back! I have been exploring it a lot and with time I have come to like it a lot. This guy is a full screen touch mobile phone from Nokia with GPS, 3G and wifi capabilities. It has got dual camera, so the front camera helps in making video calls. For full specifications you can always refer to the Nokia website . I have also taken a BSNL 3G connection on this phone so I have got a fast access internet connection in my hand all the time (well, almost all the time). This mobile phone has become very famous so much so that many of the meetings I have gone to, almost half the attendees san this phone. Its almost two-thirds the size of any of the world famous smartphones (read iPhones and Androids), but I have behaved like any of the price conscious Indian consumer and gone for this smartphone which comes for half the price. Nokia has poured in many of the goodies with this set, when I bought it, I
3 comments
Read more

December 27, 2009
How would you handle this? So far my 6 year old used to say I will become this, I will become that when I grow up. Today he said - "मैं बड़ा होके smoking करूँगा!" (Means: I will do smoking when I grow up!!!!) Out goes our reply with a long listing of our entire family tree trying to make a point that no one smokes because its not good (for health)... Added with some lecture on smoking hazards... Comes another statement - "But friend's grandpa smokes..." Discussion closed - No, its not a good thing to do... Think about doing something else... so many better (cooler) things to do... I am sure so many people would have thought about this for themselves when they were kids, but its always like "reinventing the wheel" when you become a parent and see your own kid going thru the same cycle; and trying to save them from what's not good and encourage them to take up what's good... PS: Cigarette smoking is injurious for one's health...
2 comments
Read more

December 21, 2009
Today's Hindu features a house panel report on the shoddy workmanship exhibited by the builders of the Bangalore International Airport . There are two news articles in the print edition today and I tried looking at the elaborations of shoddy workmanship in those articles, but I couldn't find any. Its a 124 page report it seems, but all that the news media has picked up is following - 1. Profit making by one of the promoters by trading BIAL shares 2. The facade of the exterior of the airport not showing the culture of Karnataka or India for that matter 3. Hold Narayanamurthy, Rajiv Chandrashekhar et al responsible for such lapses I have looked at the google news results for BIAL also, but seriously I don't find anything else in the news reports, and I am especially interested in looking at the elaborations of the poor workmanship. I would also like to the see if the house committee looked at the delay in building the approach road(s) to the airport (Why am I asking
2 comments
Read more

Shopping on the Web... 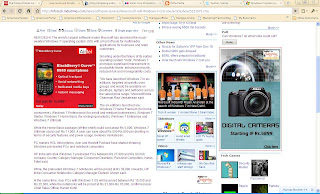 Today, I was reading an article on Windows 7 on indiatimes. An ad showed up on the website indicating (Nikon) Digi Cams are available starting Rs 5800/-. Sounds interesting, so I clicked on it... The click took me to the camera section of the seller website but the first page showed lots of Kodak and Canon cameras. Where is that Nikon of the Ad? So I checked on the checkbox on the left to see Nikon only section and here's what I got - Lesson Learnt (Again) - WYSIWYG rarely works in the Adv+shopping world. Indiatimes needs to catch up on Google Chrome. My suggestion to Indiatimes - You may want to put a "* conditions apply" tag on those ads.
2 comments
Read more
More posts